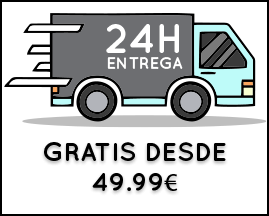 The tampons Tampax are available in the following absorptions:

- Regular: For days of low to moderate flow

- Super plus: for days of abundant flow.

The use of tampons is associated with a rare but serious condition called Toxic Shock Syndrome (OSH).

OSH is a very rare but serious disease. It is caused by toxins produced by the bacterium Staphylococcus Aureus, which is normally found in the nose and vagina. OSH is a known and treatable disease that men, women and children can suffer. It is more likely to occur in teenage girls and women under the age of 30 (menstrual OSH).

Although rare, it is important to know it to act if necessary.

Early recognition and treatment of symptoms is paramount. Signs of possible OSH include, but they don't have to occur all: high sudden fever (39oC or more), dizziness, vomiting, muscle pain, diarrhea, fainting or fainting when standing up, and skin irritations similar to sunburn.

In advanced states of the disease, the skin may peel off.

OSH can occur at any time during or shortly after menstruation. It can easily go from flu-like symptoms to a serious illness with fatal consequences. If you have one or more of these symptoms, you should remove your tampon immediately and seek medical attention. Tell your doctor you've used tampons and you're worried you might have OSH.

If you've had OSH symptoms on previous occasions, you should see your doctor before using tampons. You can reduce the risk of OSH by using the minimum absorption needed to meet your needs, changing the buffer every 4/8 hours, and using a compress instead of a tampon at least once a day during your rule. You can also virtually eliminate the risk of menstrual OSH by not using tampons.

It is recommended to always use the presentation of the minimum absorption in function of the personal flow.

€4.80 (tax incl.) €5.80
The fabulous start pack comes with everything you need for the weeks of 2 of an amazing shave.
Add to cart
Share

€7.11 (tax incl.) €7.90
Peusek Arcandol is the ideal spray to relax and tone your feet after a hard and long day of work.Contains 150ml.
Add to cart
Share